This short article was sparked by my work on a forthcoming anthology on non-voting, tentatively titled “The Non-Voters Are Right!” Hans Sherrer, a subscriber to The Voluntaryist, sent me an essay entitled “Voting Is An Act of Violence,” which began with the statement “Voting is the most violent act someone can commit in his lifetime[1].” How true is this?

First, let us define our terms.
The kind of voting referred to in this article is electoral voting, meaning the act of choosing a particular person for a particular political office. To vote in an electoral election (federal, state, or local) one must first register (after meeting certain age and residency requirements) with the appropriate governmental agency. Then on a given day, all registered voters are given the opportunity to make their choices (in secret) at a government polling place. At the conclusion of the day, the votes are tallied, and the person who received the most votes for that political office is deemed the winner, and eventually sworn into office.

The kind of violence referred to in this article is physical force (shooting guns with the intent to kill or maim, imprisoning recalcitrants, confiscating property) exercised by the employees or agents of the state (policemen, court marshals, militia men, and soldiers) who wield this force against those who disobey State laws and regulations (referred to as “refuseniks,” later in this paper). Usually the threat of arrest and imprisonment is enough to make most people docile and obedient; but the ultimate sanction held by the State and its personnel is “death” to those who refuse to cooperate. The most recent and prominent examples of these deaths are Randy Weaver’s wife and child, those incinerated at Waco, and John Singer, the Mormon homeschooler, shot by a Utah “law enforcement” officer in January 1979.

Now what connection is there between electoral voting and those who act violently in the name of the State? Why does the State want large numbers of people to participate in electoral voting? There are two primary reasons for this. First, those who act in the name of the State can use the fact that many people vote as evidence that they are acting in the name of “the people.” Widespread voting is cited as evidence of “consent.” State agents, such as legislators, presidents, and judges need an aura of legitimacy if their actions are to be viewed as right and proper by a large majority of the population. Second, governments – especially democratic ones – have discovered that as the proportion of the citizenry which holds the government in esteem increases, the less force the government requires to keep the balance of the population (those who view the government as illegitimate) under control. In other words, the more legitimacy that a government attains the less it needs to exercise outright violence against it opponents. A government which continually had to resort to violence to achieve its ends would soon be seen for exactly what it was: a criminal gang.

So, given that a successful State requires legitimacy and that one of the easiest ways to achieve legitimacy is through widespread voter participation, what is the responsibility of the voters for the actions of its government?

By voting, it is clear that each voter endorses the governmental system under which he or she lives. By the act of voting, each voter is saying: It is right and proper for some people, acting in the name of the State, to pass laws and to use violence to compel obedience to those laws if they are not obeyed.

Clearly, the voter – by pulling down a handle in a voting booth – has not used violence personally. Voting is not the same as pulling the trigger on a gun pointed at a refusenik. The voter has not used force, any more than the lawmaker, president, or judge does when they pass or sign a law, or issue a judicial decree. Yet all these people have either supported or participated in a system of governance which ultimately results in people being bullied or forced into obedience.

In legal parlance, we would have to say that the voters, office holders, and other participants in government have “aided and abetted” (incited, encouraged, countenanced) the police, soldiers, and jailers who actually commit the physical aggression required in order to bring about submission of the refuseniks. Various war crime tribunal decisions since World War II have established that both elected officials and dictatorial heads of state are legally responsible for the commission of crimes that are committed under their orders, but not by their own hands. In other words, those giving the instructions to soldiers to kill innocent civilians are responsible, even though they do not personally hold the weapons or pull the triggers. Although this principle of liability has never been extended backwards from political leaders to those who participate in elections, it should be clear from this analysis that the chain of responsibility extends from those who exercise the actual violence, to those who give the orders that the violence be used, to those who participate in elections which result in those political leaders being elected.

Now let us return to the initial question of this article: What truth is there to the statement that “Voting is the most violent act someone can commit in his lifetime.”? Let this question be answered by assuming that one is not a serial murderer or does not engage in any type of overt criminal activity. In other words, let us assume that most people who vote in electoral elections otherwise lead peaceful, innocent lives. Is voting the most violent act that they will commit in their lifetimes? Based on the argument in this article, the answer must be “Yes.” Each person, by voting, sanctions the violence used by agents of the State. The link in the chain of responsibility for that violence surrounds each voter when he pulls down the lever in the voting booth. Voting is an act of presumptive violence because each voter assumes the right to appoint a political guardian over other human beings. No individual voter or even a majority of voters have such a right. If they claim to possess such a right, let them clearly explain where that right comes from and how it squares with the self-evident truths of the Declaration of Independence “that all men are created equal, [and] that they are endowed by their Creator with certain unalienable “Rights” of “Life, Liberty,” and Property.

It was with good reason that Henry David Thoreau in his essay on “Civil Disobedience” called for a total abstinence from the ballot box. “When the subject has refused allegiance, and the officer has resigned his office, then the revolution is accomplished.”  (-End Is Voting an Act of Violence?  by Carl Watner)

[1] For this article, and others, by Hans Sherrer see:
Voting Is An Act of Violence
By Hans Sherrer
(1999)
http://forejustice.org/vote/voting_is_an_act_of_violence.htm

The Non-Voters “Won” Another Landslide Victory in 2008!
By Hans Sherrer
(January 14, 2009)*
http://forejustice.org/vote/non-voters_won_another_landslide_victory.htm 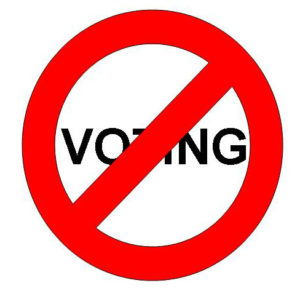