[Editor’s Note: Political scientists James Payne has taught at Yale, Wesleyan, Johns Hopkins, and Texas A&M. He wrote his first book (published by Yale University Press) while an undergraduate at Oberlin College and now has over a dozen books and monographs to his credit. Disappointed with the irrelevance an
d left-wing orientation of the academic political science discipline, Payne resigned his tenured professorship (at Texas A&M) in 1985, and became an independent, free-lance scholar living in Sandpoint, Idaho. His recent w 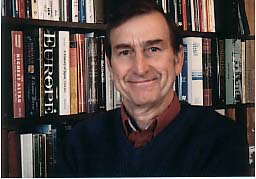 orks include an analysis of Congress and the budget (THE CULTURE OF SPENDING: WHY CONGRESS SPENDS BEYOND OUR MEANS), an evaluation of the tax system (COSTLY RETURNS: THE BURDENS OF THE U. S. TAX SYSTEM), and an examination of social assistance policies (OVERCOMING WELFARE: EXPECTING MORE FROM THE POOR–AND FROM OURSELVES).

When I began writing the first book of the Princess Navina series in 1978,1 had no idea that my efforts would culminate in 2002 with a volume laying out a picture of a voluntary society. In fact, I wasn’t at that time a voluntarist, as I now call myself, and probably would have laughed at someone who tried to put forward a model of a voluntary regime. I was a professor of political science at a state university (grossly overpaid, I can now confess), and committed to finding ways to fix the flaws of government.

These, I was discovering, were more numerous and appalling than I, or almost anyone, had dared to report. In fact, I was seeing that when government policies are closely examined, they often seem diabolically perverse, as if policy makers had started out with the aim of doing as much harm as possible. This thought provoked me to invent, as an intellectual exercise, a fictional country where the rulers deliberately intend to inflict harm and sow havoc. It was remarkable to see how often the policies developed by these evil-intentioned rulers were the same as those cherished by modern lawmakers. Seeing that my friends enjoyed this little tale, I eventually published it (PRINCESS NAVINA VISITS MALVOLIA, 1990).

This book, like the others in the series, is a short, illustrated volume in large type. My aim was to make my points quickly and easily for an adult audience and to avoid at all costs anything dull and ponderous. I saw my books as an imitator of GULLIVER’S TRAVELS but one that avoided the interminable verbiage of that work. (PRINCESS NAVINA VISIT MALVOLIA employs but 9,000 words; in the same space Gulliver has not even begun making a single point.) As it turned out, the casual format gives the work the appearance of a children’s book, and it has also succeeded in that market. The Malvolia book and the two sequels that also explored government dysfunctions propelled me to a deeper level of analysis. Almost any thoughtful person can see that government is laughable, and often tragically, inept. But what is the underlying cause of its incompetence? The quest to answer that question led, in the end, to PRINCESS NAVINA VISITS VOLUNTARIA.

The problem, it seemed to me, is centralization. With government, a small number of people attempt to-manage much more than they can possibly understand. Imagine, for example, setting a minimum wage for scores of millions of people in tens of thousands of employment situations. Any rule on the subject made from the center would necessarily be inappropriate, ineffective, or harmful in countless numbers of cases. Similarly, how could a tiny handful of men and women wisely oversee the spending of two trillion dollars in tens of thousands of programs and services? Such a system would necessarily involve massive amounts of waste and misallocation. It became increasingly clear that the only rational way to tackle the provision of community services is a highly decentralized system where tiny units deal with problems small enough for the relevant decision makers to grasp, tiny units like individuals, families, and local commercial and voluntary organizations. As the Princess put it (in PRINCESS NAVINA VISITS NUEVA MALVOLIA), “What’s wrong with politics is that everyone’s trying to fix things from a distance, like cooks trying to bake a pudding through the speaking tube. No wonder they blunder. When you tend things right under your hands, you can succeed.”

If small-scale decision-making is best, why has the world opted for centralization? One is at first tempted to blame it on the hubris of politicians. I have spent many years researching the psychology of politicians, interviewing both American and Latin American leaders in an effort to determine their motivational outlook. The results clearly show that most of them are egotistical status seekers, craving fame and glory. It is natural, then, that they should seek to implement grandiose, centralized schemes in hopes of becoming national heroes. But yet, the blame lies not only with politicians. Political leaders play to a mass audience that obviously endorses this penchant for centralization. When a national leader gets up and promises to fix the country’s education, agriculture, or medical care, the public does not mark him as an idiot. They think he is making sensible, commendable proposals! So the underlying problem is that human beings are not by nature constructed to be humble. We always seem to think our opinions are valid, even though those opinions might be based on mere fragments of information, whim, shallow impressions, hearsay, or emotion. The result is almost everyone wants to impose his ideas on faraway situations where it appears at first glance that something is wrong. For example, when it is reported that workers are paid seemingly low wages in some job thousands of miles away, very few people have the ability to suspend judgment, saying, “I’ve only heard a tiny fragment of what is bound to be complex social and economic arrangement, and therefore I have no rational grounds for drawing conclusions about right or wrong, or making recommendations for improvement.”

Instead, most people, including intelligent and educated people, will say, “How wrong that is! The workers should be paid more!”The politicians merely reflect this widespread tendency to form opinions about complex, distant circumstances. That is the basic cause of government’s destructive, inefficient centralization.

It seems clear that this problem cannot be cured by expecting people to become more sophisticated about social and economic realities. Most people have great difficulty mastering even elementary points of economics (such as the idea that there is no free lunch). It is Utopian indeed to expect the population of any country to achieve a mature humility about the human capacity to wisely address countrywide problems.

The conclusion I reached, therefore, was that if one cannot control the motive to centralize management of the social world, the alternative must be to control the means – which is, of course, the use of force. It is force that enables far-off individuals, be they senators or voters, to impose their whims on situations which they imperfectly understand. Without employing the threat of violence, these individuals would have to rely on voluntary means, like persuasion, or give up expecting their existing opinions to be made effective.

Thus, the person, who believes that far-off workers are underpaid would have to try to persuade employers to raise their wages. His advice could be taken or ignored, of course. Or, if the reformer were really idealistic, he could donate money to be added to the paychecks of the underpaid workers. Or he could try to persuade the workers to quit their underpaid jobs. The reformer who is deprived of the use of force is not without means of implementing his opinions, but these voluntary methods are necessarily piecemeal and partial. The harmful, irrational centralized control we now associate with government cannot take place.

I concluded, then, that the ideal society would be one where the members deliberately refrained from the use of force, or to put it more carefully, where they abstained from the initiation of force to attempt to solve social problems. Thus was the land of Voluntaria born. I tried to show how the public functions now undertaken by a coercive, centralized government would be undertaken in a voluntary regime more efficiently and with less vexation by small-scale units, especially voluntary organizations.

Although my aim to was identify a society where social policy was made in a rational, helpful manner, as I got into writing the story, I found myself making other points. As I tried to visualize patterns of behavior in a voluntary society, it became clear that voluntary arrangements foster friendship, generosity, and a sense of community. When you can’t use force to change other people’s behavior, this more or less compels you to approach them in a friendly, noncombative way. And when you can’t use force to improve the world, you soon realize that an improved world must depend on strengthening attitudes of helpfulness and cooperation.

Thus, I discovered that a voluntary system does not merely make good policy. It tends to make good people.

First published in Issue 122 of The Voluntaryist.