[Editor’s Note: This is a transcription of a video  (“The Tiny Dot, Explained”), made by Larken Rose in October 2014.  As you read this, please keep in mind that “The Dot” is a small group of rulers, and that there is another dot of slightly more numerical enforcers. Larken focuses on the insight that people obey because they believe their rulers are legitimate. Much as the divine right of kings only lasted as long as people believed they had a divine right to rule, so will the divine right of governments to rule only last until their legitimacy disappears.]

Hi, I’m Larken Rose and I’m the one who made the video called “The Tiny Dot.” If you haven’t seen that video yet you can find that at youtube.com/Larkenrose. Now, “The Tiny Dot” video is very sim­ple, almost to the point of being silly, but it demon­strates the difference between the number of people who are bossing us around and taking our money and the number of people who are continually handing over their money to Congress, to the people in Washington.

If you just see the statistical difference between this massive throng that’s paying for these things and the tiny little dot that’s getting our money and then spending it, it’s a ridiculous spectacle. If you just grasp the numbers involved, it’s absurd. So I made this video to see how many people could actually explain how the heck we got into this situation.

Now a bunch of people wrote comments making wild guesses of what the problem is. It’s that we’re not paying attention to what the dot’s doing, and that we have to vote for more respectable dots, and all these strange things, but none of them explain why you have this gigantic throng obeying a tiny little dot.

Finally somebody got the answer. He said “Well, it’s not just the enforcers because the tiny little dot has their slightly bigger dot of enforcers. It’s not just that the throng is scared of the enforcers, it’s that the dot has the law on its side. That’s it. It’s not just a bunch of control freaks asking for money, it’s the law. It’s your ‘fair share.’ It’s paying your taxes for the good of their country.” All this propaganda and all this terminology is used by the dot to pretend that we have a moral obligation to fund it even if we don’t like what it’s doing. Even if we think it’s destructive, and evil, and economically stupid, and anything else, they call their demands “taxes.” They don’t just say “Give us money or we’ll hurt you,” because the throng would say “No, you won’t. Look how big we are. Look how little you are.” They say “This is the law. You must your taxes,” and people believe them.

That’s why the throng obeys the dot. The throng really and truly believes that the dot has the divine right to rule the throng. All the excuses about con­sti­tu­tions, legislation, elections, appointments, and all the other political rituals: the entire purpose of that whole game is to keep up the illusion that the dot actually has the right to boss the throng around. And, con­versely, that the members of the throng have a moral obligation to obey the dot. And that is why this ridi­culous spectacle continues – why we have this huge throng obeying this tiny dot – giving it gigantic sums of money to do destructive, stupid, and evil things. The throng has been taught to believe that it is literally a sin to not give their money to the tiny little dot.

But almost everybody misses this. They look at the video and some of them say “We need to vote in a better dot. We need to petition the dot. We need the dot to change its commands.” Or even “We need a revolution and go squash the dot.” You don’t need to squash the dot. Look at the stupid thing. Look how little it is. It doesn’t matter. It only matters because the throng imagines that it has an obligation to obey the dot. Here is the point that many pro-freedom advo­cates completely miss. The problem is not the dot. It’s not its enforcers. All of the focus on the dot – with elections, and campaigning, and petitioning, and this and that other thing – all these people focusing on changing the dot, are completely missing the point. The dot isn’t the problem. 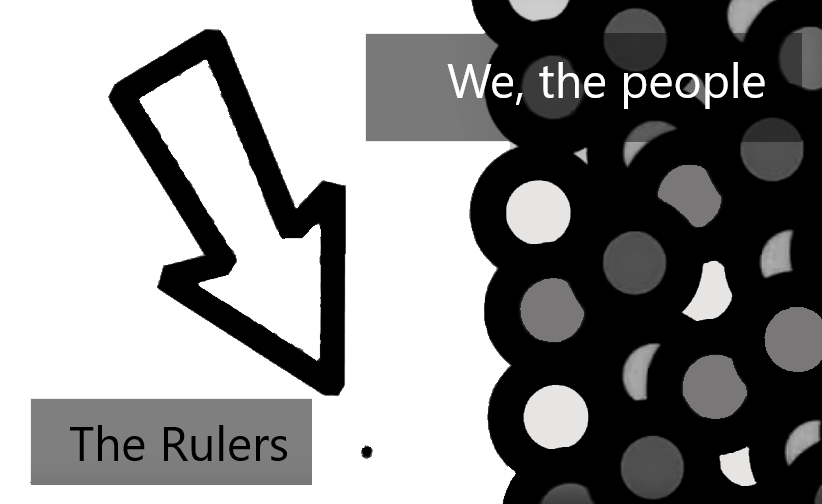 We Are Many, They Are Few

Now, of course, if one person realizes that, he’s in deep trouble because, not only will the dot and it’s enforcers try to squish him, other members of the throng will try to squish him. And when people say “Well, we have the police and the military and the IRS. You know they have a bunch of enforcers?” Yeah, but the dot doesn’t make them. The police, the tax collectors, they come from the throng. They, too, have been taught that the throng is under a moral obligation to obey this stupid tiny little parasitic dot and so they proudly go out and do their law enforcement which means some people in the throng force other people in the throng to obey the dot. And they feel righteous about it because they really and truly completely believe that it is evil to disobey the dumb little dot. It’s evil not to give the stupid little dot a whole bunch of your money.

The rest of the throng says, by way of a jury, “Oh, you tax cheat!” You pick twelve Americans, they’re going to say “You’re evil. You didn’t give your money to the dot. How dare you? Go to prison,” because the throng believes in an obligation to obey the dot even though they don’t like what the dot does with their money. They still feel a moral obligation to hand it over and that’s the problem, their perception. It’s not the dot. All of the power of the dot is illusion. The IRS agent that steals your bank account? He’s suffering the same illusion that we all have a moral obligation to give our money to the dot. Even their enforcers only do what they do because of the delusion that the dot has the right to rule and we have the obligation to obey. It’s pathetic, this giant throng begging this little dot. In the video, it’s funny to see the comparison, but most people have no idea why it happens. Why would this huge throng continually bow to this tiny little dot that’s too small to see. Puny little thing, what power does it have? You don’t even need to switch the thing. You don’t need a revolution, you don’t need to vote in a new dot. You don’t need anything. Just ignore it. Any solution that focuses on doing something about the dot is absolutely doomed to fail because the dot is not the problem. In fact any solution that focuses on “Let’s change the dot” somehow reinforces the notion that we have to obey the dot, so why bother changing it? Why bother putting in a new dot? Why not just ignore it? Because even most pro-freedom advocates along with everybody else believe that we have an obligation to obey the dot. Then our only recourse is the political process where we bicker with the dot, and try to meddle and tinker with it, instead of just saying “To heck with the dot. We don’t need it, we don’t have to obey it.” Again, if one person does that, the rest of the throng squishes him.

If the throng as a whole, or even a significant minority of the throng realizes why are we obeying the stupid dot, we don’t have to continue to do that. Game’s over. The dot has no more power because all of its power is based on the illusion that what it does is legitimate. The bad news is, it’s your belief system that is the direct cause of that ridiculous spectacle of a hundred million productive people throwing their wealth at these corrupt, lying crooks. You believe things, just as I believe things, that you were taught to believe all your life that are absolute lies. They’re utterly insane. They don’t make any sense if you actually examine the concepts around statism, govern­ment law, taxes, terminology that’s made to dupe the throng into believing it has a moral obligation to obey the dot. And I believed them for a long, long time. I believed them and I never heard anyone question them. I don’t think you’re trying to ruin the world. I don’t think you’re trying to cause misery, suffering, economic collapse, and injustice. I don’t know very many people who are trying to do that, but I know a lot of people who are doing it nonetheless because of their belief system, because of the way that their belief system drastically warps and perverts both their perceptions and their actions. If you look at the video “The Tiny Dot” and you think wow – that situation seems ridiculous – you have to understand why you, as part of the throng, are the problem. But you’re also the solution and you don’t need to fix the dot. You don’t need to reform the po­liticians. You don’t need legislation to change. You don’t need a new election. Fix what’s between your ears which may be a slow uncomfortable process. It was for me and just about everybody I know. Fix what’s between your ears and the world will fix itself.