I was born in Montevideo Uruguay, in 1981. I came from a humble, working-class family. For historical reasons, everything related to politics had been very present in my house since childhood. Like almost all of Latin America in the 70s and 80s, Uruguay also had a dictatorial government and due to the damage that this wreaked on my family, political party militancy was an important part of my childhood. The slogan then was clear: left-wing people were good and poor; right-wing people were bad and rich. Clearly as I grew older, this narrative of super-heroes and super-villains became obsolete.

As for my family, I don’t really have much to disclose about them. Although I have not had a bad relationship (it has improved over the years), probably the fairest thing is to say that their influence in this area was to show me that I could not rest much on them and therefore since my adolescence I had to find my own models well-separated from them. This does not imply an economic independence (this came much later) but a strong psychological independence, which was even more important. My parents were very good especially when it came to their insistence that I study formally (it is difficult to earn a living in Uruguay even with a professional degree, much more without it). Somehow they wanted me to do what they didn’t do, but they never pushed me to the level of torture with this. They trusted me for this, much more than any other aspect of a child’s life. I think they are not disappointed. I am glad to think that in any case their happiness would be a by-product of my activity. They also showed me that you could be very educated and trained without having gone to university (as was their case), which I later complemented with the inverse situation, when I found that you can really be an idiot with several postgraduate degrees. Many of the most interesting people I have ever come across have never been to college, and maybe that is the result of their not attending college.

The biggest influence on my transformation from a supporter of limited and military government to LeFevrian autarchist ideas has been the Myers-Briggs typology (and later Keirsey). This came through my work in Human Resources where this chart was used to create work teams. This took place during 2013. At that time I was working as a civil servant in the Ministry of Industry, Energy and Mining. After getting familiar with the chart during the next few years, I decided to identify myself as a Stoic, and graciously submitted to whatever other testing was available in order to confirm this.

Then, I found that from time to time, the labels on the chart changed. It first came on the scene during World War I, and was used by the US Military in World War II. Some time in the new century, Stoicism was replaced by Autarchism. The problem was that I had never heard of Autarchism. When I looked it up on Wikipedia I read about Robert LeFevre. Who was this man? This in turn led me to Carl Watner’s biography of LeFevre, TRUTH IS NOT A HALFWAY PLACE, which I finished reading in 2019-2020. 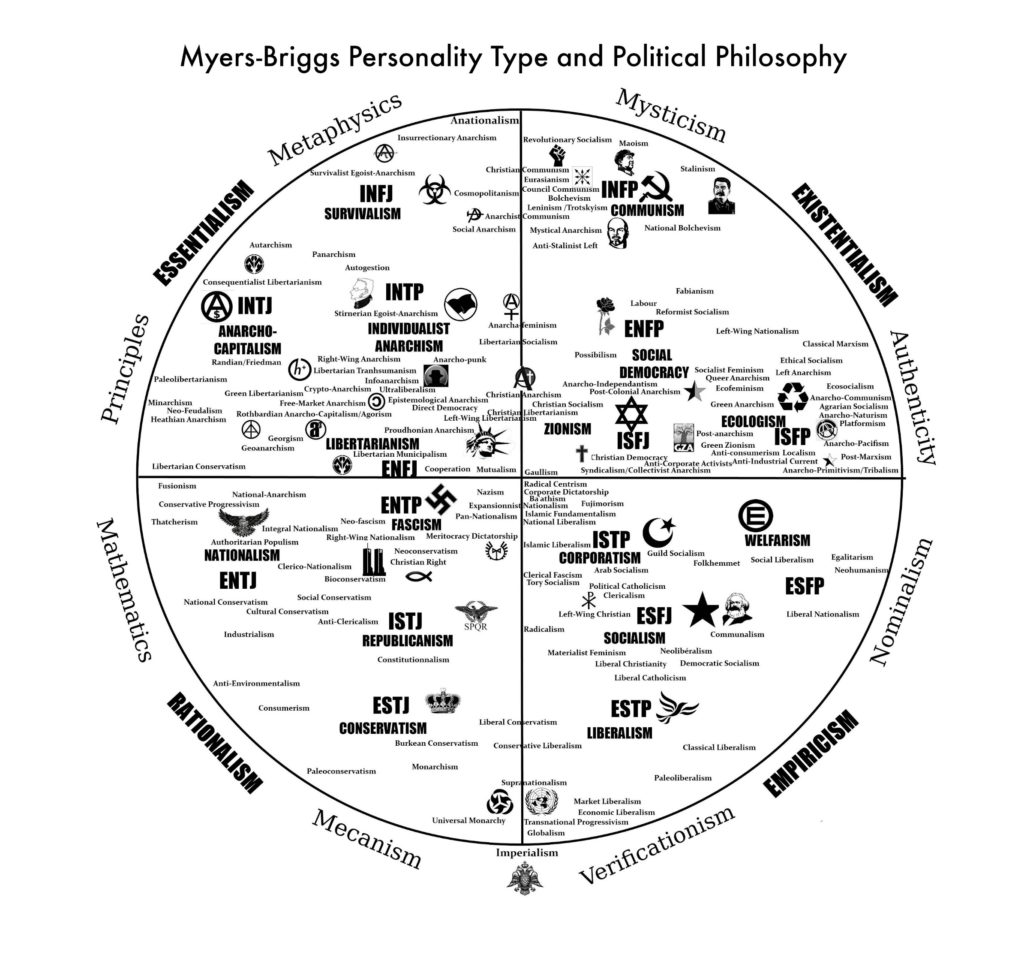 The four letters on the chart stand for the different configurations of basic personality types (there are 16). Each letter corresponds to a “function” of the human personality: Introversion / Extroversion; Intui­tion / Sensing; Thinking / Feeling and Judging / Per­ceiving.

There is also a way to classify them into groups of four based on the role to which privilege is granted (this differs for MBTI and Keirsey, as each has a different classification criteria).

In my own case, I came closest to the INTJ: Introversion; Intuition; Thinking; and Judging. As you can also see, I have medium degree of fluency in English, but it is not my native tongue. I have a professional doctorate in Law and Social Sciences (equivalent of a J/D in North America) and a bachelor degree in Philosophy. I am also working on an extended Master’s degree in Contemporary Philo­sophy about LeFevre, tentatively titled “The Autarch­ism of Robert LeFevre: Between the dirty reality and the ‘neat’ utopia.”

Although ‘voluntaryism’ is not on the Briggs, Myers, Keirsey chart, I eventually found my way to the voluntaryist website. There was a link to it in the Autarchism article I had found in Wikipedia. I certainly did not expect to find in this philosophy something that was directly opposed to LeFevre’s thought, and it was hoped that I would also feel comfortable with the line of thought that voluntaryists advocated. Without difficulty I could commune with each and every one of the points in the Fundamentals of Voluntaryism, as well as in the Statement of Purpose.

It was at this point that I begin to wonder why I was not a voluntaryist, and – more interestingly still – why LeFevre could not be considered a voluntaryist. I am convinced, until evidence to the contrary is presented to me, that there is no reason to argue that LeFevre cannot also be considered a sort of voluntaryist (at least if what is required to be one is the peaceful acceptance of the Statement of Purpose). In the same way, this criterion could be applied to me, as long as I agree with what LeFevre thought (and that is why I am an autarchist) and at the same time I have no qualms about accepting the voluntaryist fundamentals. Ultimately, the only objection that could be minimally acceptable is in the semantic field. It is obvious that “autarchism” and “voluntaryism” are not synonymous. On the other hand, it is also true that LeFevre came to formulate the term “autarchism” based on a need that pushed him to distance himself from the violent anarchism of the early 1960s. Still, LeFevre never was really comfortable with the term “autarchism.” In his announcement in 1965, he said it was for “lack of a better name” and “until we have a better name” that he would call himself an autarchist. Perhaps the best argument is to claim that there is no contradiction between the two philosophies. I believe that autarchism is comprised within voluntaryism. It is in this sense, that I consider LeFevre’s Autarchism to be a form of Voluntaryism.