In 1975 my fiancé, Pauline, and I were living in Santa Barbara, California where I was a stockbroker. I was acquainted with the scion of a wealthy local family who shared my interest in exotic cars, and we happened to own the same make and model. There’s one thing that stockbrokers always need, and that is customers, so I hoped to land him as a client. One day out of the blue he called me and urged me to attend a lecture series that he called “V-50.” He tried to answer my questions about the content of the program, but I felt that he was suspiciously vague. I was afraid that it was one of the “new age” self-improvement programs that were increasingly common in California and I had absolutely no interest in those. However, he said some magic words: “I think I will have a hard time doing business with anyone who hasn’t taken this course.” He told me that for $20 I could attend any three of the first six sessions of the total 16 lectures, so I said okay.

A few evenings later Pauline and I found ourselves 30 miles away at a Holiday Inn with about 40 other people listening to the lecturer, Jay Stuart Snelson. We heard, for the first time in our lives, an analysis of social issues presented from a scientific perspective. Just for starters (and anyone with scientific education will appreciate this) precise terminology was used throughout the program. “Ho hum,” you might say, but if you think about it you’ll realize that words like freedom, coercion, liberty, property, crime, justice, morality and many others are used routinely without agreement on their meaning. For example, everyone is for “freedom,” but what is it? This is in sharp contrast to the physical sciences, where words like mass, force, electron, power, ohm, kilogram and so forth have meanings that are agreed upon by all scientists. Snelson pointed out that only by this means, which he called semantic precision, is reliable communication possible. If we don’t first agree on what freedom is, it’s unlikely that we’ll get it. The same is true for justice and so forth.

As the course progressed we realized that it was ultimately about freedom: what it is and how to achieve it. Freedom was defined as, “The societal condition wherein every volitional being has full (100%) control of his property.” Some might believe that freedom defined in this way is an unreachable, utopian dream. That’s the natural response of anyone who hasn’t had the course, and a major reason why graduates say very little when urging people to attend, lest people think they are crazy. I came to understand why the description given to me had been vague. (Imagine yourself in 1667 urging a friend, “I urge you to go to some lectures by a fellow named Isaac Newton. Why, you say? Well, among other things he figured out how to go to the moon.”) 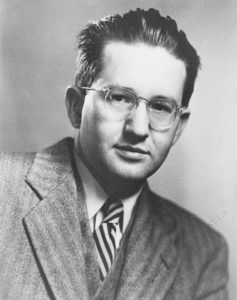 V-50 was the product of the mind of Andrew J. Galambos, an astrophysicist, who observed that progress in the social sciences had failed to keep up with that in the physical and biological sciences, leading to the very real possibility that we might cause our own extinction. To address this issue Galambos created what he called a new science, the science of Volition, complete with postulates and a set of precisely defined terms and concepts that were not only internally consistent, but consistent with human nature. These were brilliantly applied to construct a social framework that, he claimed, would produce freedom, and with it prosperity. This would be a world without a state, where all human interactions were voluntary. We had never heard anything like this before (nor do we know of anyone to have replicated Galambos’ specific ideas since) and were soon convinced of its rightness. I went from being a person who in the previous presidential election had voted for the statist, collectivist, George McGovern, to a person who believed—and could demonstrate—that politics can’t solve anything, that political action is immoral, and that only a stateless society can produce the benefits that almost everyone wants. (As my excuse for supporting McGovern, I offer the fact that he was against the war in Viet Nam, where I had served.)

Pauline and I were married before the end of the course and happily received the “additional family member” tuition discount. Upon completion we were offered, without pressure, a course catalog listing the other courses available at Galambos’ company, the Free Enterprise Institute. When the catalog came in the mail I felt like a kid in a candy store, seeing a large number of exciting-sounding classes ranging from investments and insurance to physics, psychology, and communication, plus a host of courses devoted to Volitional science. Over the next six years we enrolled in almost everything that was offered, including some that were by invitation only, and all taught personally by Prof. Galambos. All told, we spent about 1,000 hours in lectures. The courses were priced lower per hour of lecture time than comparable college courses, and each of them came with a money back guarantee. (If only that had been offered for some of the college courses I took while getting my degree!) In the subsequent decades I can only think of two things where I have come to believe that Galambos was probably mistaken, and both of them are minor.

The Free Enterprise Institute operated on a for-profit basis, did not advertise other than by word of mouth, but still attracted many thousands of students. Sadly, Prof. Galambos contracted Alzheimer’s before writing the two major books he had pre-sold to his students. However, he wisely chose to tape record all of his lectures, and those tapes survive. After his death, a transcript of his delivery of his basic course, V-50 (a catalog number) was published by the Trustees of his estate. That book is titled Sic Itur Ad Astra, (This is the Way to the Stars), and I am fortunate to have a copy. A second book, containing his ideas on intellectual property as presented in Course V-201, which he called his most important course, was never published as a result of a controversial decision by the Trustees, who also decided to withdraw the first book from the market. In 2008 Mr. Snelson authorized a former student, Charles Holloway, to offer for sale high-quality audio recordings of Course V-50 as given by Snelson. (He taught the course for 14 years, and far more students took V-50 from Snelson than from Galambos). Some of these may still be available for purchase.

Having listened to and read this knowledge many times, I can only say that in my opinion Galambos’ ideas are one of the greatest intellectual achievements of man. Like many others, I consider attendance at his courses to be of far greater value to me than the courses I took in order to earn a college degree. And I mean practical value in daily decision making, in addition to the theoretical value of the ideas in creating a better world. I believe that anyone, even someone already convinced of voluntaryism and who “already knows all that,” would get great value from V-50 because there are insights there, as well as a structure, that are not available anywhere else even to this day. Fortunately, it is available online at www.fei-ajg.com. In addition, Frederic G. Marks, attorney for Galambos for many years, is discussing some of the material at his website, www.capitalismtheliberalrevolution.com.  A word of caution about other Internet references to Galambos: if they are from people who didn’t take the courses, then they are based on hearsay. Any of the specific details they might have heard are out of context, which is one of the reasons why I haven’t revealed any of those ideas here. I have seen Galambos referred to as a “crank” and a “nut” but these labels come from people who haven’t taken any of his courses and don’t know what they are talking about.

Galambos did his work pre-Internet. What a difference it might have made if he had had access to it! For example, he advocated building a parallel voluntary society to exist alongside the state, one that would survive the state’s collapse, which he considered inevitable for all states. With the Internet, such a thing is made easier and, in a way, I believe it is happening as people connect in cyberspace. Of course, Galambos envisioned a society in the physical world, and if there were a place, stateless and privately owned, with rules based on the principles he developed, I, and I believe many people, would find it so attractive that we would move there in a heartbeat.

– then you meet the basic definition of being a voluntaryist.

In addition voluntaryists endorse the following Statement of Purpose:

Voluntaryists are advocates of non-political, non-violent strategies to achieve a free society. We reject electoral politics, in theory and in practice, as incompatible with libertarian principles. Governments must cloak their actions in an aura of moral legitimacy in order to sustain their power, and political methods invariably strengthen that legitimacy. Voluntaryists seek instead to delegitimize the State through education, and we advocate withdrawal of the cooperation and tacit consent on which State power ultimately depends.

If you are reading this page and consider yourself a voluntaryist, then you are invited to write an article on ‘how you became a voluntaryist.’ Please use our Contact page to let us know.