Using Gold and Silver in Everyday Trading By Carl Watner

Why have gold and silver been mankind’s choice for use as money for thousand of years? Has our new digital/virtual technology changed our need for a durable, stable, and unalterable money? No, mankind’s propensity to truck and barter still requires a medium of exchange which exhibits the ability to be divided into smaller units without loss of value, which can be easily stored and transported, and which is valued by people all over the world. Gold and silver became money because they are limited in supply, require hard work to produce, satisfy people’s desire for ornamentation, and have many industrial uses which add to their potential exchange value.

Money, being a medium of exchange, serves as the lifeblood of our economy. When poisoned by governments, or imitated by counterfeiters, it no longer serves its true purpose, which is to facilitate voluntary exchanges among people who trade the products of their labor for the products and services of others. When governments control the money supply, and when the money supply becomes divorced from real commodities, such as gold and silver, there is a natural inclination to increase its supply. Paper money, bank credits, and digital representations of money can be created with relatively little work. It costs the government no more to print a thousand dollar bill than a one dollar bill. The economist Ludwig von Mises is reputed to have said, “Government is the only institution that can take a valuable commodity like paper, and make it worthless by applying ink.” Just like the German inflation after World War I, when governments increase the supply of money, the purchasing power of each unit is diluted and lowered, unless there is a corresponding increase in the production of real goods and services. If too much money comes into existence, it will eventually become worthless and people will refuse to accept it.

Those of us who have lived most of their lives in the last half of the 20th or first part of the 21st Century have little experience with real money. The purpose of this short primer is to make you knowledgeable enough about gold and silver so that you recognize their various forms, so that you know how to value them, and will become more comfortable using them in everyday life. (Using Gold and Silver in Everyday Trading)

The key to understanding the value of gold and silver is to realize that they are commodities whose value is dependent upon their weight and purity. The current or “spot” price of gold and silver are quoted on the New York Commodity Exchange every work day, and are based on the value of one troy ounce, .999 fine. The weight of most precious metals is measured in troy ounces. The troy ounce weighs 31.1035 grams compared to the avoirdupois ounce which is only 28.3495 grams. So the troy ounce is about 10% heavier than the avoirdupois ounce; but even more confusing is the fact that there are only 12 troy ounces to the troy pound, while there are 16 avoirdupois ounces to the more commonly used avoirdupois pound. The fineness of gold or silver refer to the degree of their purity. For metallurgical purposes, .999 fine is the most pure and refined form available. Gold jewelry is sometimes measured in carats. Pure gold is 24 carat; other gold alloys are proportional. Thus, 8 carat jewelry is 8/24ths or .333 fine; while a 12 carat piece is 12/24ths or .500 fine.

It is often said that “beauty is in the eye of the beholder” and this is equally true for gold and silver. If you are out in the middle of a desert, neither will quench your thirst, but in most situations in everyday life, objects of gold and silver will exchange based on their intrinsic value. This is determined by taking their weight, in troy ounces, and multiplying it by their fineness, in order to determine their melt value (what they would be worth if taken to a refinery and melted down for their pure metallic content). Thus, for example, common silver dollars minted between 1878 and 1935 contain 412 ½ grains of silver of .900 fineness, which when multiplied equals 371.25 grains of .999 fine silver, which was the original definition of a “dollar.” (See “A Chronology of Gold and Silver in American History.”) Since there are 480 grains of silver to the troy ounce, 371.25 grains of .999 silver is the equivalent of .7734 troy ounce in the silver dollar

Subsidiary United States coins, such as the dime, quarter, an half-dollar minted before 1965, contain somewhat less silver, proportionally than the silver dollar. The net weight (in troy ounces) of these coins, respectively is .07234 fine silver; .18084 fine silver; and .36169 fine silver, which is the equivalent of .7234 fine silver per dollar. This pre-1965 “junk” silver (since they have no special numismatic value) contains 90% silver and 10% copper. If $ 1000 of dimes, quarters, or half dollar coins were melted down they would yield about 715 ounces of pure silver (which allows for some coins being less than full weight on account of being worn down due to age and/or handling). A common way of referring to the value of this type of silver is to speak of them being worth so “many times face value.” If silver is $ 30 per ounce, a $ 1000 bag of junk silver would be worth $30 multiplied by 715 ounces, or $ 21,450, which would be the equivalent of 21.45 times face value. Ten dollars of quarters would be worth $ 214.50; $100 of half dollars would be worth $ 2,145. Other factors often come into play, especially when trading with a coin dealer or investor. If you are buying, you might pay a premium over intrinsic value; if selling you might receive somewhat less than melt. All this depends on market supply and demand, and how competitive your local coin dealer is compared to internet offers.

Although junk silver is probably the most common form of silver to be traded, there are other kinds of objects containing silver bullion to be found in the market place. Canada, Austria, and Australia are other countries that have minted junk silver coins. There are also commemorative rounds and generic bars, which usually contain 1 or more ounces of .999 fine silver. Also, the United States Mint has produced large quantities of Silver Eagles containing exactly one ounce of .999 fine silver. These types of coins, bars, ingots, and rounds are all known as bullion products because their value is usually a small premium above the value of their net content.

Just as there are many forms of silver, gold bullion is similarly found in many varieties. The South African Krugerrand was one of the earliest coins to contain exactly one ounce of .999 gold. American gold coins, such as $ 20 gold pieces contain only .96 troy ounce .999 fine. The American Gold Eagle Series, introduced by the US mint in 1986, are one ounce gold coins .999 fine, as well as fractional 1/10th, 1/4th, and ½ ounce coins. Other nations and private companies have also produced bullion coins, bars, and wafers ranging in weight from 1/10 of an ounce to large kilo bars (32.15 troy oz.). 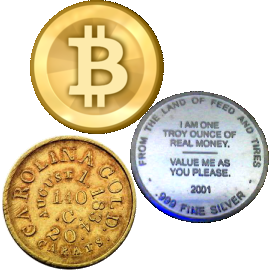 There are many sources of information on trading gold and silver. Three companies that maintain detailed internet sites are California Numismatic Investments (www.gold dealer.com), Dillon Gage (www.DillonGage.com), and The Moneychanger (www.the-moneychanger.com). The Silver and Gold Payment Calculator (www.silverandmoneyaregold.com), maintained by Solari and The Moneychanger makes it quite easy to value gold and silver equivalents in numerous currencies based on current spot prices.

However, when all is said and done, what is the purpose of trading with gold and silver, rather than simply in US government denominated dollars? First of all it is empowering. You are using and expanding your knowledge of real world money. Such money cannot be easily manipulated or duplicated so as to destroy its value. Secondly, it allows you to remain aloof from many of the vicissitudes of politics, bank closings, and taxpayer-funded bail-outs or bail-ins. Thirdly, gold and silver act as a constant store of value, which maintains their purchasing power over the decades. Until 1935, one ounce of gold was valued at $ 20. Less than 100 years later, the same ounce of gold is worth more than $ 1500. Similarly, an ounce of silver which was worth about $ 1.29 is now worth more than $ 27 per ounce.

The Founders were poignantly aware of these things. During the Revolutionary War, they and state legislators passed laws forcing people to take government paper money. They caused and experienced inflation first hand. They understood why the expression “not worth a continental” was one of derision and why it came into existence. They prohibited the states from making anything other than gold and silver legal tender in payment of debts. They would have looked askance at our current monetary situation. They would encourage us, if they were here, to use gold and silver. Wal-Mart and the big chains will not accept it, but small tradesmen and merchants would be more inclined to do so. Buy locally, and offer to pay in ounces of gold or silver and see what happens. You might be surprised. You might help start another revolution in finance: a return to real world money and independence from government federal reserve notes.

Using Gold and Silver in Everyday Trading, For Further Reading:

WHAT HAS GOVERNMENT DONE TO OUR MONEY? Murray Rothbard, (First Printing January 1964).

“Hard Money in the Voluntaryist Tradition”

“Trust Not in Princes”

“Value Me As You Please”

“Paper: No Substitute for Gold!”

“Freedom to Choose Your Own Money”