At a recent one day seminar at Freedom Country, the question was asked: “What can a person do to make this world a better place?” Mo single answer was articulated, but two different conceptual approaches were apparent. The responses of the participants could be categorized according to whether or not they believed

In other words, which comes first – the chicken or the egg? Better individuals or the better society?

Nineteenth century reformers, especially the non-resistants and abolitionists, grappled with this problem. How were they to advocate the abolition of slavery? Should they wait for Congress to abolish slavery or should they try to eliminate the vestiges of slavery from their daily lives? Should they be immediatists or gradualists? Should they use legislative means or moral suasion? Should they vote or hold office or should they denounce the U.S. Constitution as a tool of the slaveholders?

Those nineteenth century thinkers whom I would label voluntaryist (such as Henry David Thoreau, Charles Lane, William Lloyd Garrison, Henry Clarke Wright, and Edmund Quincy in pre-Civil War days, and Nathaniel Peabody Rogers) all believed that a better society only came about as the individuals within society improved themselves. They had no plan, other than a supreme faith that if one improved the components of society, societal improvement would come about automatically. As Charles Lane once put it, “Our reforms must begin within ourselves.” Better men must be made to constitute society. For “society taken at large is never better or worse than the persons who compose it, for they in fact are it.” The Garrisonians, for example, were opposed to involvement in politics (whether it be office-holding or participating in political parties) because they did not want to sanction a government which permitted slavery. Their opposition to participation in government also stemmed from their concern with how slavery was to be abolished. To Garrison’s way of thinking it was as bad to work for the abolition of slavery in the wrong way as it was to work openly for an evil cause. The end could not justify the means. The antielectoral abolitionists never voted, even if they could have freed all the slaves by the electoral process. Garrison’s field of action was that of moral suasion and not political action. He thought that men must first be convinced of the moral righteousness of the antislavery cause. Otherwise it would be impossible to change their opinions, even by the use of political force.

Given this approach, it seemed that the anti-electoral abolitionists had no real strategy. In rebutting this criticism, Nathaniel Peabody Rogers, in a September 6, 1844 editorial in the HERALD OF FREEDOM, spelled out his answer to the question: “What is your Plan?”

(T)o be without a plan is the true genius and glory of the anti-slavery enterprise. The mission of that movement is to preach eternal truths, and to bear an everlasting testimony against the giant falsehoods which bewitch and enslave the land. It is no part of its business to map out its minutest course in all time to come, – to furnish a model for all the machinery that will ever be set in motion by the principle it is involving. The plan and the machinery will be easily developed and provided, as soon as the principle is sufficiently aroused in men’s hearts to demand the relief of action.

What is the course of action these abolitionists have pursued? How have they addressed themselves to their mighty work? …They were not deterred by finding themselves alone facing a furious and innumerable host of enemies. They felt that the Right was on their side, and they went forward in the calm certainty of a final victory. They began, and as far as they have remained faithful, they continue to perform their mission by doing the duty that lieth nearest to them.” They soon discovered that Slavery is not a thing a thousand miles removed, but that it is intertwined with all the political, religious, social and commercial relations in the country. …In obedience to the highest philosophy, though perhaps not knowing it to be such, they proceeded to discharge their own personal duties in this regard-to bear an emphatic and uncompromising testimony against Slavery, and to free their own souls from all participation in its blood-guiltness. They laid no far-reaching plans,…but obeyed that wisdom which told them that to do righteousness is the highest policy, and that to pursue such a straight-forward course would bring them soonest to the desired goal. Their question was not so much how shall we abolish Slavery? as, how shall we best discharge our duty?

Edmund Quincy in a February 24, 1841 editorial by the same title, in THE NON-RESISTANT, pointed out that social institutions are but the projection or external manifestation of the ideas and attitudes existing in people’s minds. Change the ideas, and the institutions instantly undergo a corresponding change. In words reminiscent of Bob LeFevre’s emphasis on self-control, Quincy went on to write, that

There is a sense in which the kingdoms of the world are within us. All power, authority, consent, come from the invisible world of the mind. External revolutions, accomplished by fighting, have in general affected little but a change of masters… .

We would try to bring about a mightier revolution by persuading men to be satisfied to govern themselves according to the divine laws of their natures, and to renounce the (attempt to govern others) by laws of their own devising. Whenever men shall have received these truths into sincere hearts, and set about the business of governing themselves, and cease to trouble themselves about governing others, then whatever is vicious and false in the existing institution will disappear, and its place be supplied by what is good and true.

We do not hold ourselves obliged to abandon the promulgation of what we believe to be truths because we cannot exactly foretell how the revolution which they are to work, will go on, or what will be the precise form of the new state which they bring about. …A reformer can have no plan but faith in his principles. He cannot foresee wither they will lead him but he knows that they can never lead him astray. A plan implies limitations and confinement. Truth is illimitable and diffusive. We only know that Truth is a sure guide, and will take care of us and of herself, if we will but follow her.

THE VOLUNTARYIST essentially upholds the same ideas as these nineteenth century thinkers. We advocate moral action, rather than politics and elections because moral suasion lays the axe at the root of the tree. We believe that moral action alone is sufficient to nullify State legislation. Legislation is not needed to abolish other legislation. Harmful and unjust political laws should simply be ignored and disobeyed. We do not need to use the State to abolish the State, any more than we need to embrace war to fight for peace. Such methodology is self-contradictory, self-defeating, and inconsistent.

Difficult as it is to totally divorce ourselves from the State, each of us must draw the line for him or herself as to how and to what extent we will deal with statism, whether it be driving on government roads, paying federal income taxes, using government “funny’ money, or the post office. Several things are imperative, though. We must support ourselves on the free market, never taking up government employment. We must also remain uninvolved in politics, refusing to vote or run for public office. We must never accept a government handout or government funds (even when justified on the pretext that the money was stolen from you or that you were forced to contribute to a government program. No one is forcing you to accept money which the government has stolen.)

In short, what we are advocating is that every one take care of him or herself and care for the members of his or her family, when they need help. If this were done, there would be no justification for any statist legislation. Competent individuals and strong families, particularly the three generation living unit, are some of the strongest bulwarks against the State. (And it should be remembered that families need not be limited by blood lines. Love, which brings outsiders into the family, is often more important than blood ties.)

If people would only realize that it is the individual and only the individual that directs the use and control of human energy, the world would change as individuals change themselves. The chart which we display here is described by PREVENTION magazine (April 1987) as a prescription for regenerative living. Change starts with you and me! This means good family, friends, healthy living habits, lifelong learning, and rewarding and satisfying work; which in turn lead to good neighbors, a good community, a thriving economy, and a natural environment. That pretty much sums it up. What is our plan? – a better world begins with a better you! 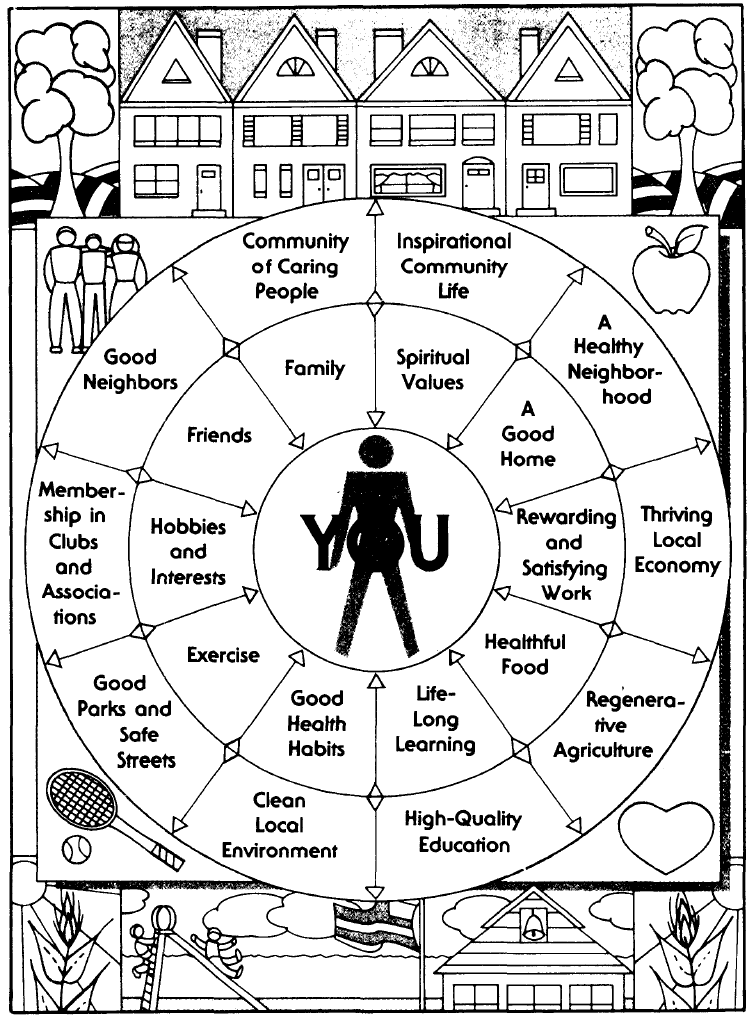